Within the boating community, the name Grand Banks has become synonymous with the romance and luxury of long-distance cruising – a far cry from its humble origins on a vacant lot in a far-flung land. 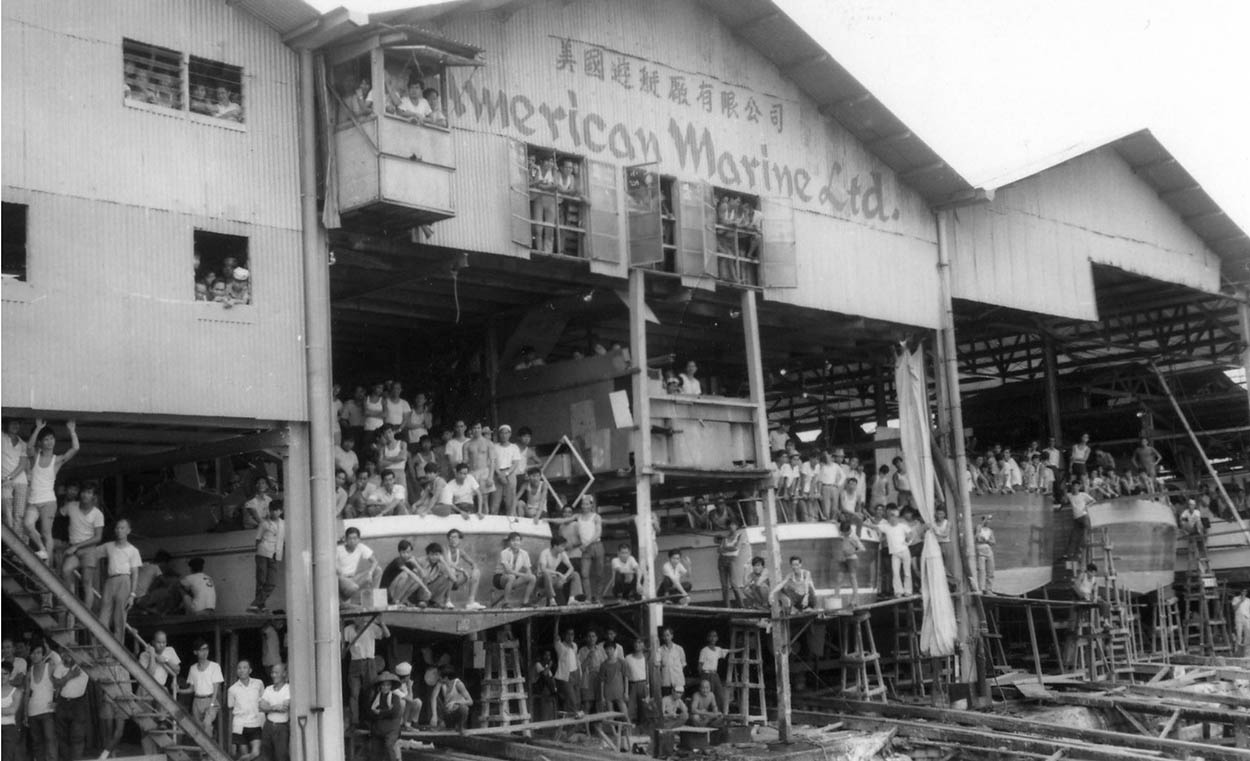 Our story begins some seventy years ago in what was then the British colony of Hong Kong. Robert Newton, an American expatriate, was the manager of Bireley’s soft-drink bottling plant located on a street called ‘Mok Cheong’ – a somewhat prophetic name, given the initiative that would soon transform his life, Mok Cheong translates as ‘factory that works on wood’!!

Robert had no experience as a marine engineer or designer. But, already in his late 50s and with no desire to retire, he suggested to his two sons – John and Whit – that they establish a boat building yard on the empty lot where his company’s trucks were parked every night.

And so, in the random fashion of so many great ideas, the seeds of Grand Banks were sown!

By 1962, Robert had moved the flourishing enterprise to Junk Bay. Under the name ‘American Marine’, he and his sons were building heavy sailboats and big motor yachts.

THE BIRTH OF AN ICON

As the company’s reputation grew, they attracted some of the world’s most renowned marine architects – Sparkman and Stevens, William Garden, Nat Herreshoff and Ray Hunt.

They reached a seminal moment in their evolution in the early ‘60s with the launch of ‘Chantyman’ – 34’6” in length and diesel-powered, it had a raised pilothouse, high bulwarks and softer hull lines. While bearing scant resemblance to the elegant lines of a contemporary Grand Banks, this boat was certainly the design that introduced the concept of a production style trawler to the world.

Its success led to a fundamental change in the company’s strategy. In 1963, designed by Kenneth Smith, ‘Spray’ was launched and became the prototype of a category that would take the marine world by storm – the finely built, 8 knot trawler. 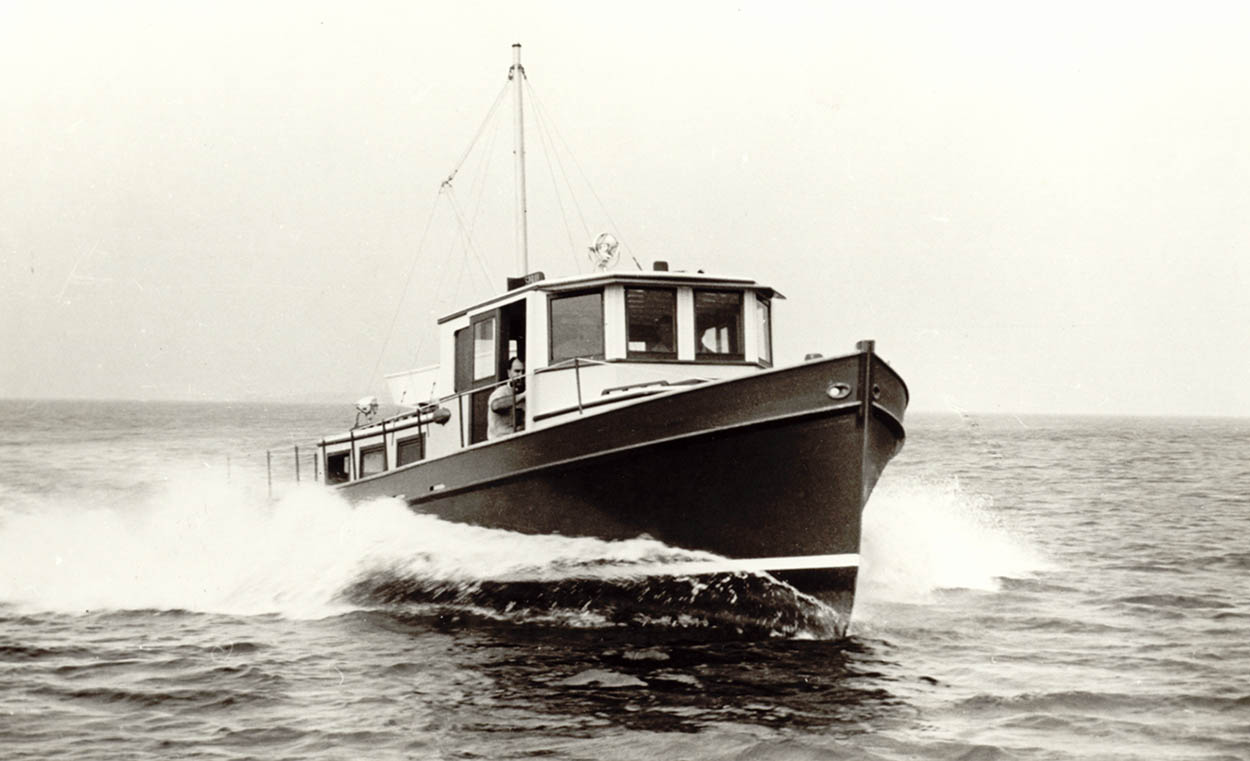 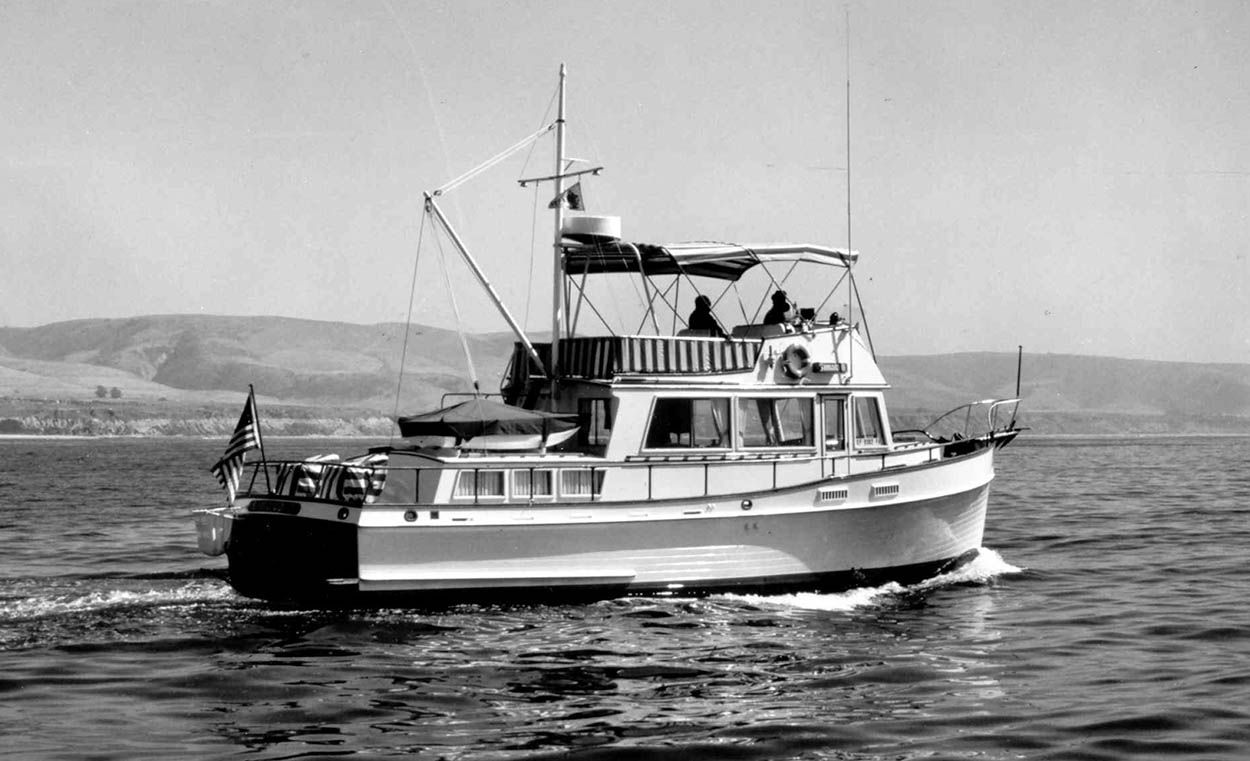 The immediate appeal of this 36-foot, diesel-powered cruiser led the Newtons to abandon their custom yacht building business to concentrate on the production line that would eventually become Grand Banks. Since 1965, when the first models were launched, 1,136 GB36s have been built.

In 1968 the factory was moved from Hong Kong to Singapore and five years later a very progressive decision was made – all hulls thereafter would
be made of fiberglass, not wood. Fearing the skepticism of traditional yachtsman, the company didn’t notify dealers, buyers or the general public. But, as history attests, it was a decision that has more than proved its value in terms of strength, weight, durability and ease of maintenance.

Along with the GB32 and GB49, these four boats became the ‘Heritage Series’ that created the trawler category within the recreational boating industry. Forty years later, you’ll find many of them still on the water, cruising gracefully along the coastlines and out on the oceans.

Such was the continuing success of the company, it attracted other illustrious names from the world of nautical design. Harvey Halvorsen led the team until he established his own firm in 1975.

And throughout the 1970s, Tony Fleming was our Technical Director and helped introduce the iconic range of raised pilothouse boats before founding his own business.

But perhaps the most significant sea change in the fortunes of Grand Banks occurred in 2014 when our parent company acquired the Australian-based, Palm Beach Motor Yachts. This boutique brand, owned and designed by ocean-racing champion Mark Richards, had built a reputation for producing the most exquisitely styled and crafted boats.

Now, with Mark appointed CEO of Grand Banks, the combined expertise and experience of the extended team has led to a fundamental reinvention of our boats and our brand. 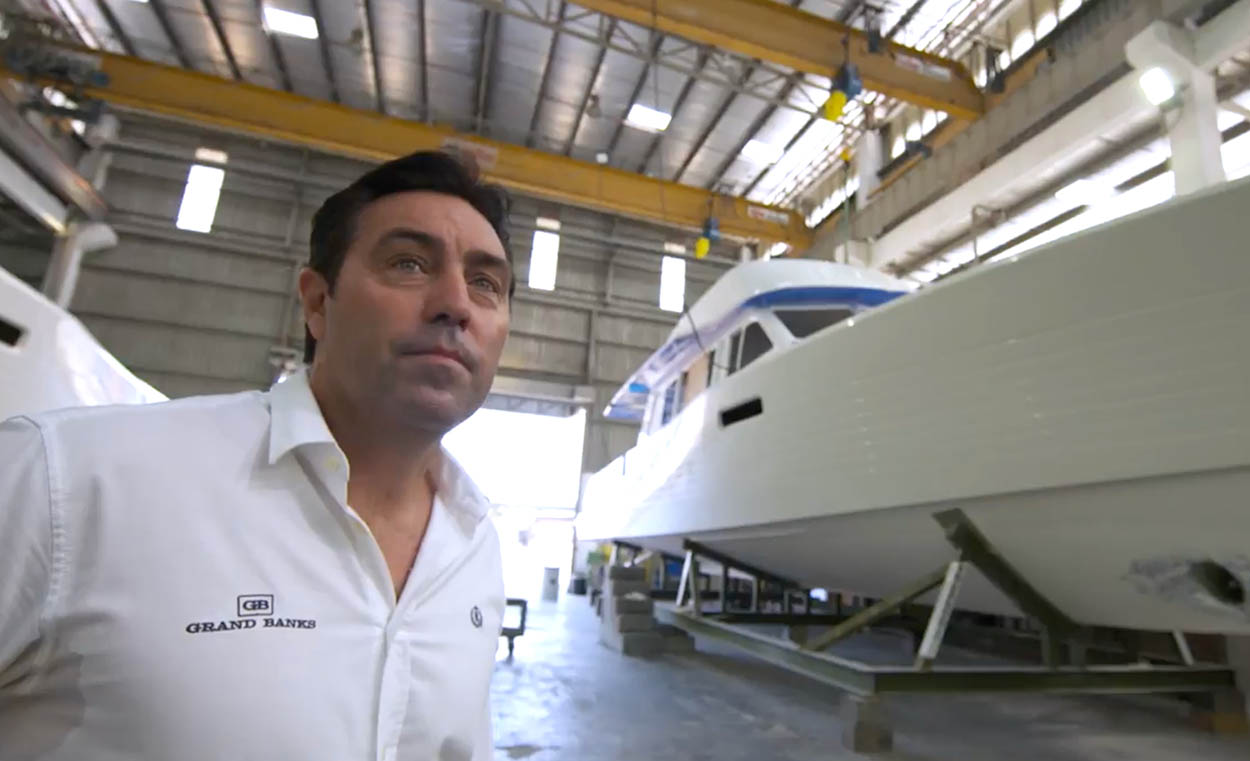 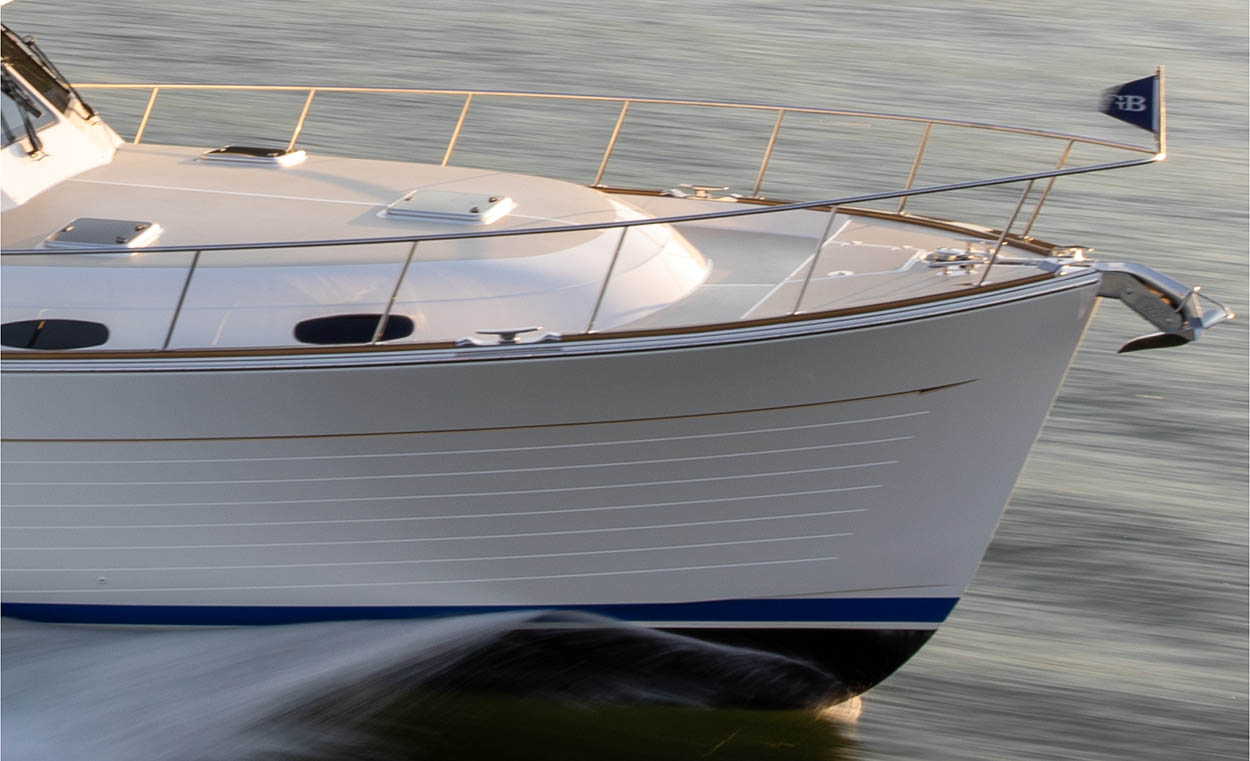 THE PAST MEETS THE FUTURE

The new range of Grand Banks Motor Yachts retains all the virtues of its glorious heritage – style, luxury and the capacity to take families and friends on extended cruises to new and exciting locations.

In 1995 our production facility moved to Malaysia. The expanded and revamped factory now employs the most sophisticated systems and technology in the boat-building industry.

These new models are the fastest, most stable, most comfortable and most fuel-efficient cruisers that you’ll see in any marina today.

This is truly the reinvention of an icon.

WITH MARK NOW AT THE HELM OF THE COMPANY, HIS PIONEERING SPIRIT AND STORY OF OCEAN RACING SUCCESS HAVE BECOME IMPORTANT THEMES IN BOTH THE NARRATIVE AND THE FUTURE OF GRAND BANKS. 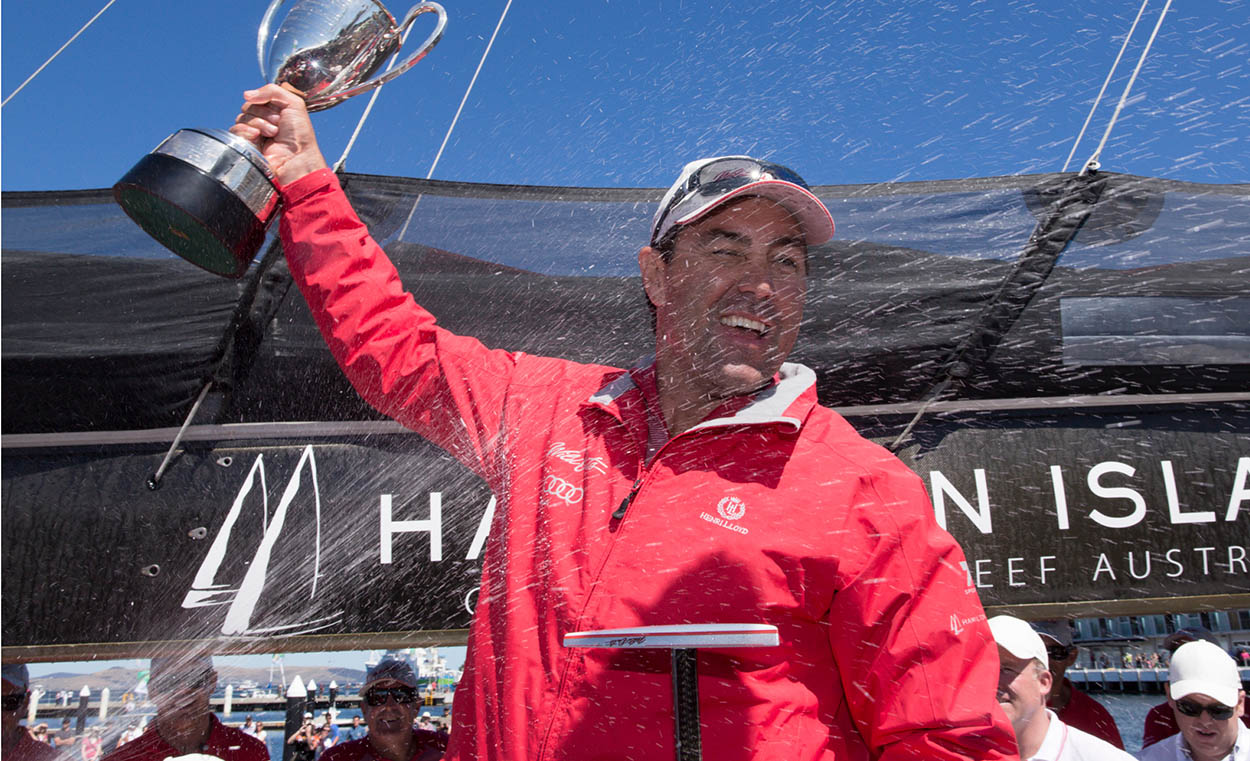 HISTORY IN THE MAKING

Back in the late 90s, Mark first collaborated with Australian businessman, Bob Oatley, to develop a series of 60ft racing yachts. This teamwork culminated in the sloop ‘Another Duchess’ which proved to be the star performer in the 2003 Race Week at Hamilton Island. With Mark at the helm, she was described by competitors and pundits alike as ‘Unstoppable!’

However, it was the arrival of Wild Oats IX in the same year that cemented Australia’s most successful racing partnership. Named after one of Bob’s vineyards in the country town of Mudgee, she was the first yacht equipped with a hydraulic canting keel and took Mark to victory in the Admiral’s Cup in England.

ONCE IN A LIFETIME!

But it is Wild Oats XI that will go down in history. This 100ft maxi yacht was completed only two weeks before the 2005 Rolex Sydney to Hobart yacht race and yet went on to win the ‘treble’ – line honours, handicap and race record.

And that was just the start of her story. Since then, Mark has skippered Wild Oats XI to victory a further eight times, winning the Treble a second time and repeatedly breaking all records in this most gruelling of races.

It’s the stuff of legend. 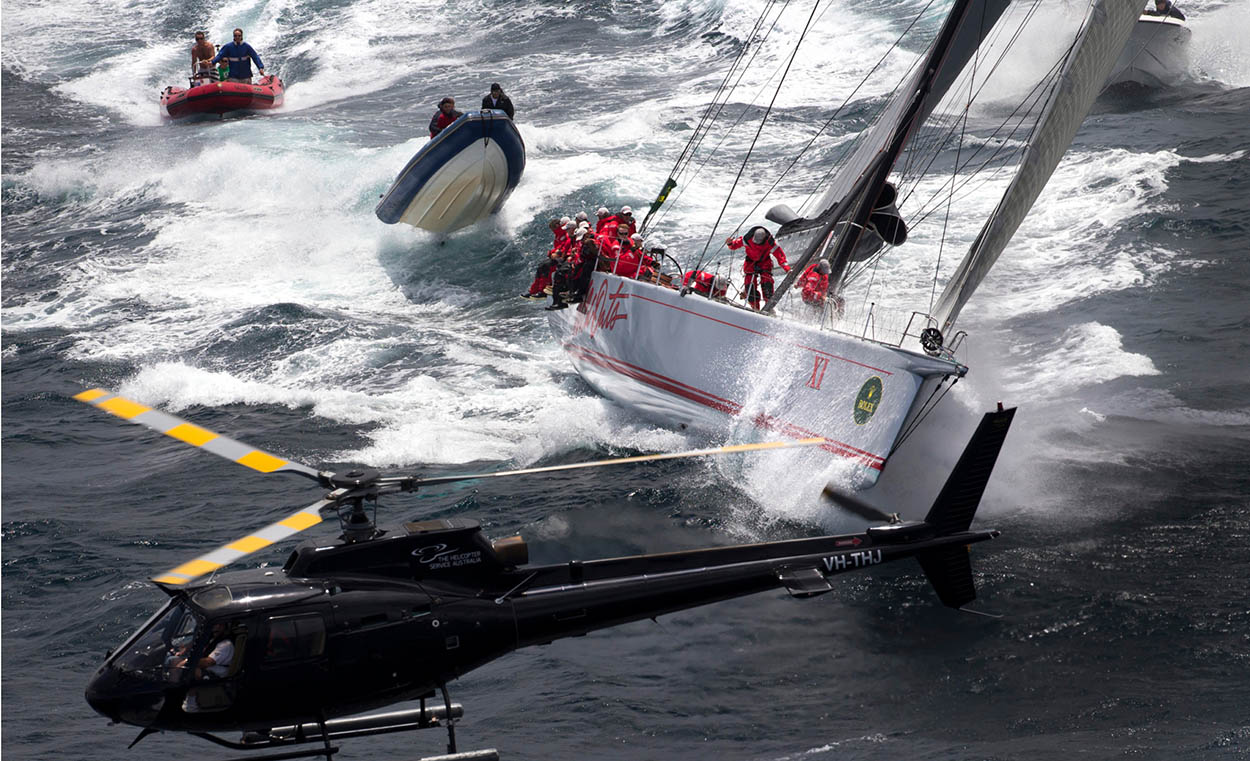 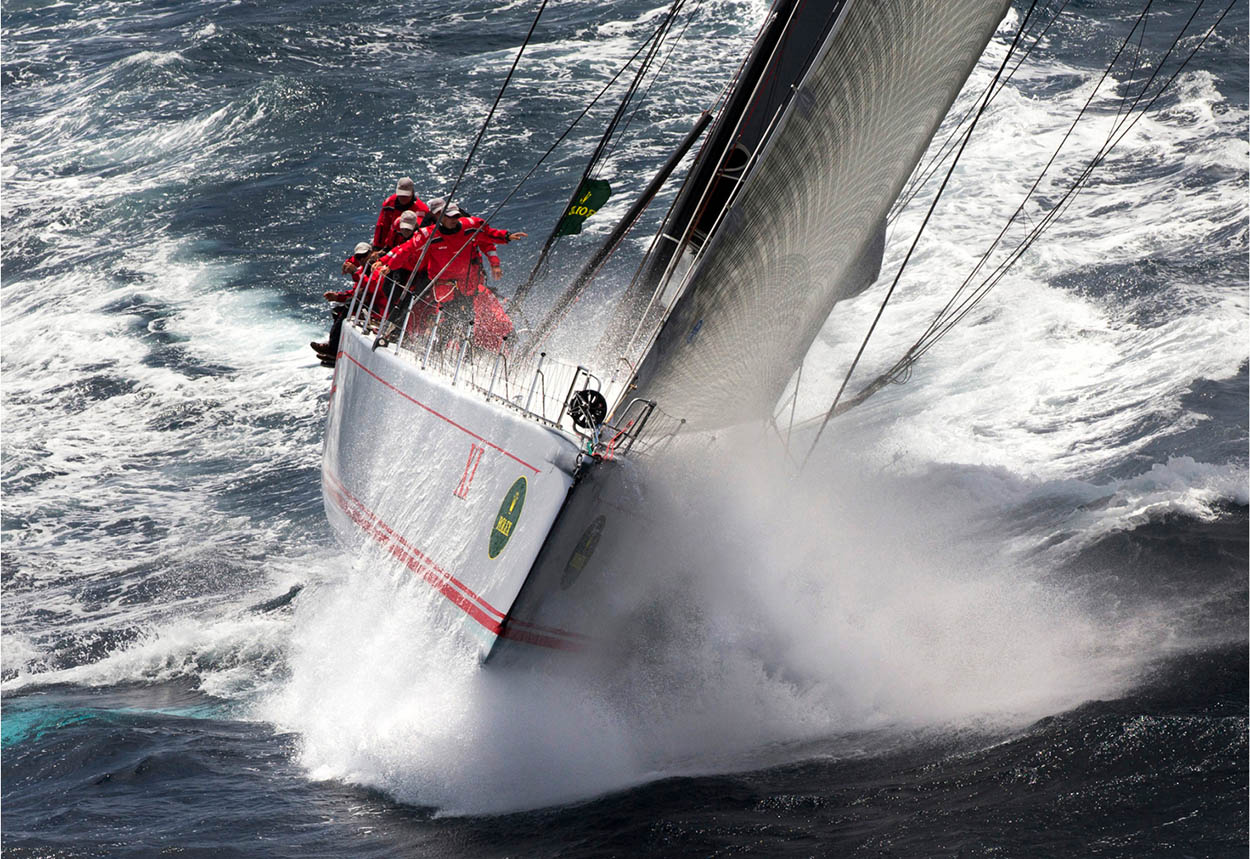 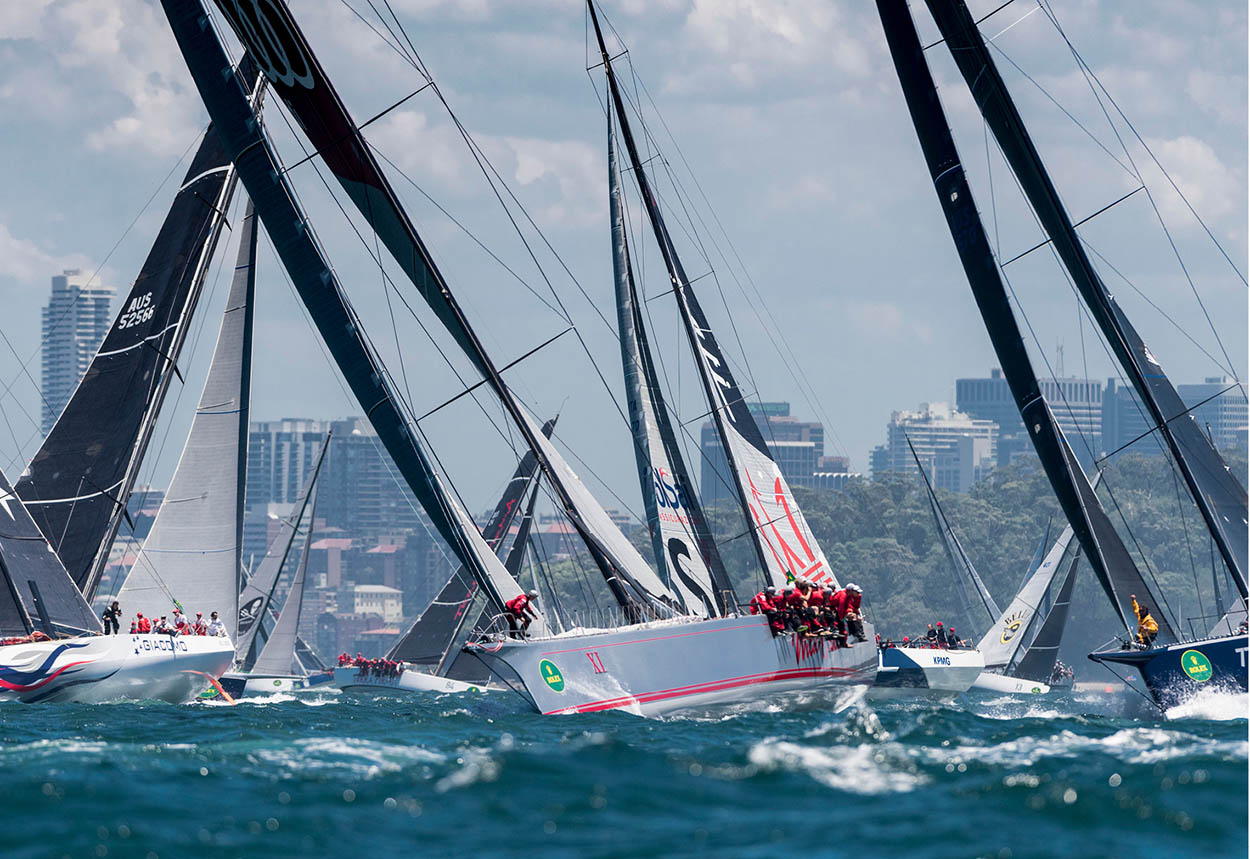 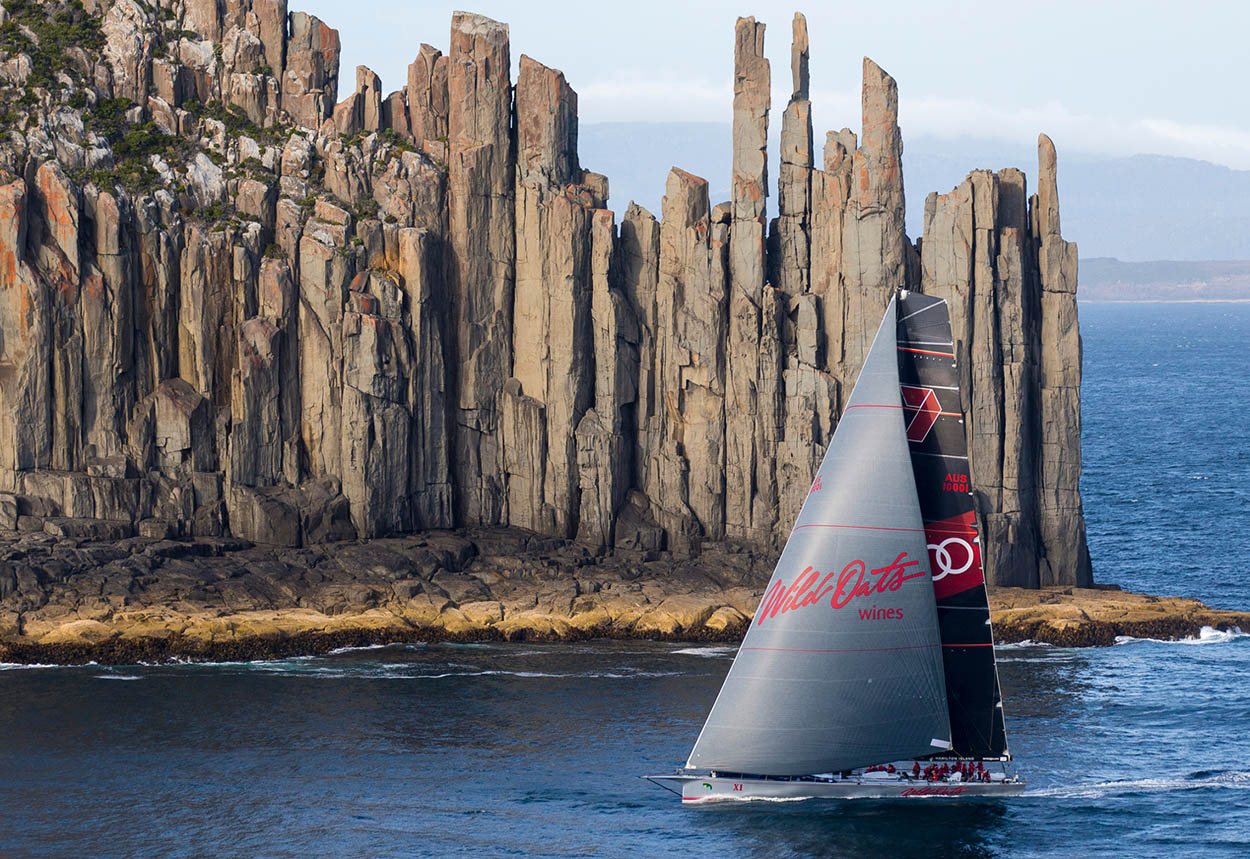 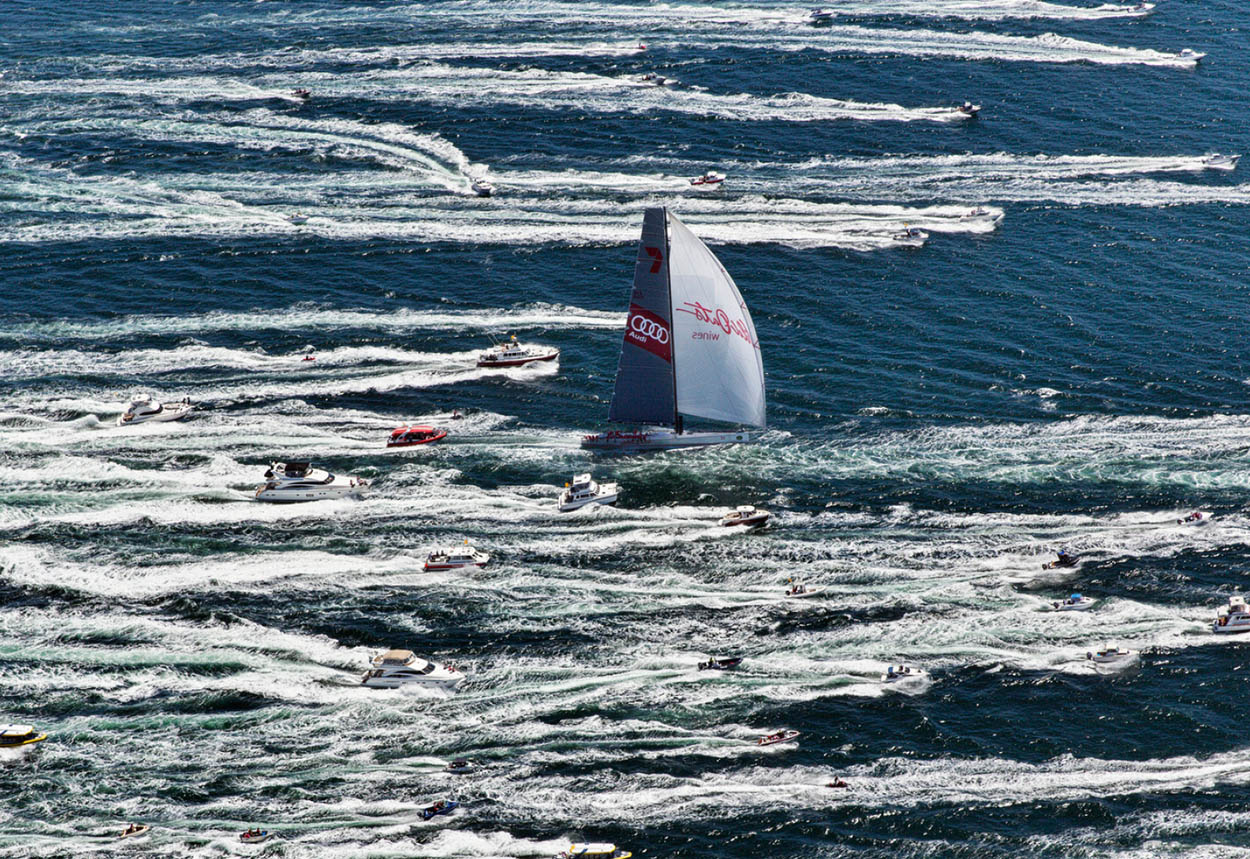 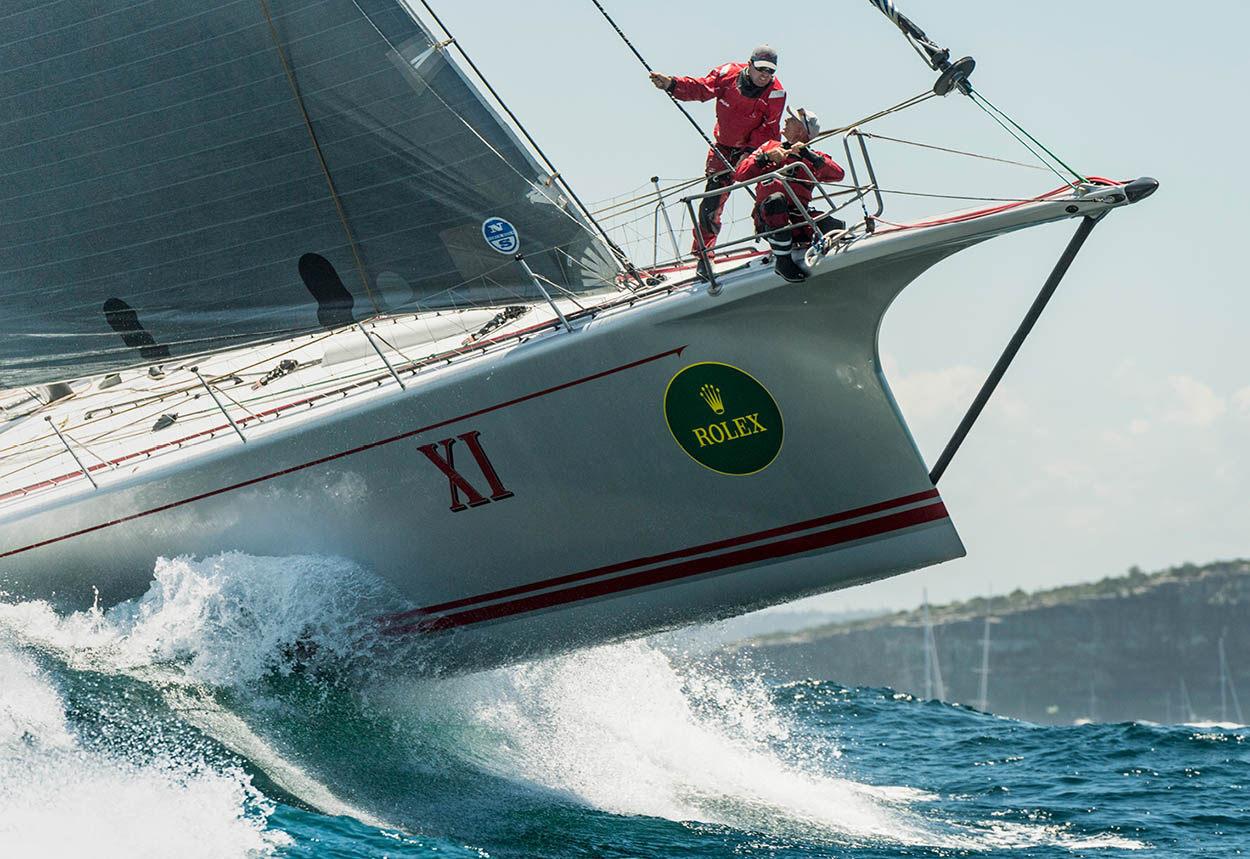